“The one artist that I feel could be my brother is Franz Kafka.”
– David Lynch

“Gentlemen, two days ago a young woman was found murdered by the same individual I believe responsible for the death of Laura Palmer. I have reason to believe that the killer is in this room. As a member of the Bureau, I spend most of my time seeking simple answers to difficult questions. In the pursuit of Laura’s killer, I have employed Bureau guidelines, deductive technique, Tibetan method, instinct, and luck. But now I find myself in need of something new, which, for lack of a better word, we shall call… magic.”
– Agent Dale Cooper, Twin Peaks

“Someone must have been telling lies about Joseph K., for without having done anything wrong he was arrested one fine morning. His landlady’s cook, who always brought him his breakfast at eight o’clock, failed to appear on this occasion. That had never happened before.”
– Franz Kafka, Der Prozeß

There are a few things I truly enjoy in life. In somewhat of an order, I love my wife, coffee, Kafka, a good mystery, cinema, the German language, and research. And I get all of that Sunday nights when my wife and I sit down to watch Twin Peaks: The Return. Now you might be saying, “But there isn’t anything German in Twin Peaks.” But you’d be forgetting about Heidi.

David Lynch might not be for everyone. He can be a pretty strange guy… yet there are layers to not only his stories but his visuals as well. And I think that’s why I like his work. Give me a surrealist, Kafkaesque mystery, and I’m one happy camper.

As an observer, which you are when you watch TV or movies, you have to allow the director and screenwriter to mold your expectations and perspective both emotionally and psychologically. And with David Lynch, it’s worth the experience.

A David Lynch film, much like the work of Franz Kafka, presents you with the familiar and then distorts or allows some unknown force into it just enough to make the protagonist (and often the observer) uncomfortable. The given effect alienates you from the familiar, the known, and then gives you a tiny peek into the unknown. Then by the end, you’ve been tossed in without knowing how to swim so to speak. And when you are drowning, you want to escape. The way Lynch pulls you in deeper is that he adds a mystery aspect to it. A good mystery always draws the observer in. A good mystery makes the observer a detective.

Think about True Detective and the sprawl of information and how it was presented. Like Twin Peaks, True Detective gave us characters obsessed with solving something. And since it was so well done, the observer became obsessed as well. Everyone and their neighbor decided to try their hand at detective work and became couch detectives. Because it’s fun trying to solve the puzzle. True Detective drives at finding the answers against a heavy sprinkling of clues that only present new complexities and entanglements over the course of 17 years. With Twin Peaks, it is similar but more along the lines of going “What the fuck is this?” In the end (also like the original run of Twin Peaks), the True Detective story gets a wrap up. Maybe not as neatly as we would have liked but wrapped up all the same. Rust and Marty get Errol Childress, and Coop and Truman get Leland Palmer/to “save the queen.”

But what about the rest of the Childress clan and their cult religion? What are with those damn owls? While the story was done and over with for the networks, the couch detective was left unsatisfied. Because they only got an answer, not all the answers.

{AUTHOR’S NOTE: Two things to take away from True Detective: 1) If there is a religious group somehow connected to the crime, there’s probably some deep, dark shit going on, and 2) never underestimate rednecks/swamp people/country bumpkins.

But there is one more twist to a Lynchian/Kafkaesque mystery: There are no answers wrapped up nice and neat for you by the end. And that is because the real answer might be otherworldly or just beyond our scope of understanding.

OK, so we might be S.O.L. on getting definite answers. But it is fun to daydream and give your mind a little mental exercise. When season 2 of Twin Peaks ended 26 years ago, the answers we got were: 1) who killed Laura Palmer and 2) how to find the entrance to the Black Lodge. But we never found out who or what BOB actually is or what the Black Lodge is. The show wasn’t picked up for a third season, leaving these questions unanswered. And 26 years later, we got a new season and we’re still in the Black Lodge and the story still revolves around Laura Palmer. Somewhat. 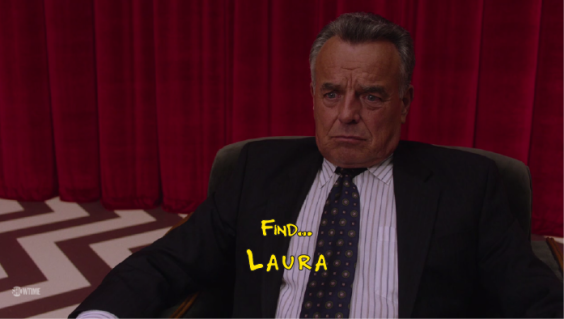 “The ocean of solutions is within, enliven that. … It’s a world of clues, a world of mystery but the mystery can get solved, you can find a lot of answers for these things within.” – David Lynch

The nice thing about Twin Peaks: it is worth the second viewing. Hell, maybe even a third and fourth. There are always some little bread crumb left behind as a clue. Or maybe just a cool Easter Egg. Like Dale Cooper’s uncanny skill of fending off assassins:

Or whatever this is (theories below):

Reviewing the previous episodes against the new ones, quasi Dale Cooper-like, is like diving into an ocean of solutions. Take episode 8 for instance. It starts off as a normal story line (Ray and Evil/Dark Coop are getting out of jail via blackmail) then the story erupts into a surrealist dreamscape interposed into “reality.”

Here is a synopsis:

Ray shoots Cooper’s doppelgänger. Ghostly men tear at his body, revealing a sac with BOB’s face. Ray flees, leaving Jeffries a message that the doppelgänger may have survived. Later, the doppelgänger awakens. In 1945 New Mexico, the first atomic bomb is detonated. A convenience store is occupied by ghostly men. Floating in a void, the Experiment spews a stream of fluid; one globule manifests BOB’s face. In a building above a purple sea, [???????] watches the detonation, the convenience store, and BOB. He levitates, light emanating from his head. Señorita Dido enters, and [an] orb with Laura Palmer’s face inside floats down to her. She sends the orb to Earth. In 1956 New Mexico, a creature hatches from an egg. A woodsman descends to the ground, then enters a radio station and kills the receptionist. Overpowering the disc jockey, he repeatedly broadcasts the words “This is the water and this is the well. Drink full and descend. The horse is the white of the eyes and dark within,” sending listeners unconscious. The creature enters an unconscious girl’s room and climbs down her throat. The woodsman kills the disc jockey and leaves.

The episode presents to us one thing that I’d like to discuss. This involves ??????? (the artist formerly known as the Giant), the golden/Laura Palmer orb, and the Experiment vomiting out BOB and the egg. And astrological symbolism. More specifically I would like to talk about how it could possibly relate back to the second season in relation to finding the entrance to the Black Lodge. 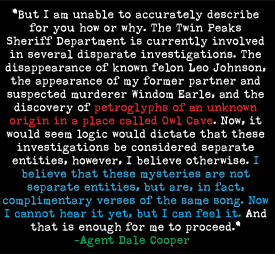 In the second season, we’re introduced to Cooper’s old partner, Windom Earle, and how he is obsessed with the Dugpas¹ and the Black Lodge. During Windom Earle and Cooper’s game of cat and mouse, or, in this case, chess, the investigation leads Cooper and the Twin Peak’s Sheriff Department to the Owl Cave and inside the cave they discover a map.

From the Twin Peaks Wiki:

The map, or calendar is an ancient Native American petroglyph carved into the stone wall of Owl Cave. As a map, it shows the location of the gateway to the Lodges, Glastonbury Grove. As a calendar, it predicts the time when the gateway will be open with the glyphs of Jupiter and Saturn. The gateway itself only exists at a certain point in space and time, given by the details of the map/calendar. 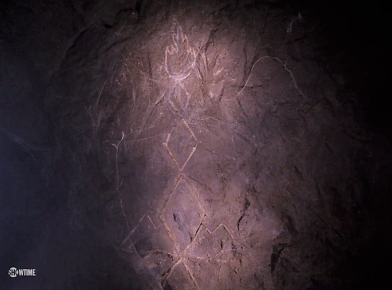 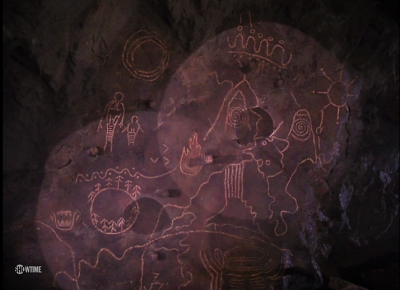 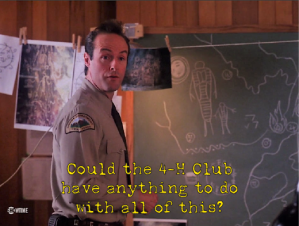 As stated above, the map depicts Jupiter and Saturn in conjunction. And this is where I speculate there is a connection between episode 8 and season 2. Namely, the relationship between the planets and the characters related to the Black and White Lodge. And, unlike what Deputy Andy believes {AUTHOR’S NOTE: maybe he’s on to something…}, it has nothing to do with the 4-H Club. First, let’s take a closer look at the map:

Agent Cooper states that the other markings are planets as well, though, some of them are close to unintelligible from the drawing done by Andy. Three are pretty clear (to me):

{AUTHOR’S NOTE: Why would an old cave with Native American carvings in it have Roman astrological symbols?}

In Roman mythology, Jupiter² gave birth through his head to Minerva. She is often depicted with her sacred creature, an owl usually named as the “owl of  Minerva”, which symbolized her association with wisdom and knowledge. Minerva also dibble-dabbled in strategic warfare. To me, this resembles pretty closely to ??????? (7 question marks, 7 letters in Jupiter) producing the golden/Laura orb that was later sent to Earth.

This could be a reference to planets in houses in astrology. But I’m no expert.

Watching season 3 as a whole, you notice that a lot of the scenes with Agent Cooper leaving the Red Room contain outer-space (as well as the previous season’s plot line dealing with UFOs). This raises the question if each of these different locations Cooper visits might be a “planet.” And if this is the case and ??????? is Jupiter, then who or what is Saturn (Greek = Cronos, who swallowed all of his children except Zeus {Jupiter}) and how does BOB play into all of this? Let’s take a look into some more mythology.

An argument could be made that BOB is Pluto, ruler of the Underworld (in Greek, he’s Hades aka “The Hidden One”) whose symbol is also a combination of the letters L & P. Think along the lines of Leland Palmer, who at one point was possessed by BOB and raped/murdered his daughter. One of the more well-known stories concerning Pluto is the Abduction of Persephone (aka Kore). Just another age-old tale of man wanting something from a woman which the woman really isn’t into. Going along with this ruler of the Underworld theme, there is a scene from the finale of season 2 in which Windom Earle asks Cooper to trade his soul for Annie’s. BOB puts a stop to it and says this: 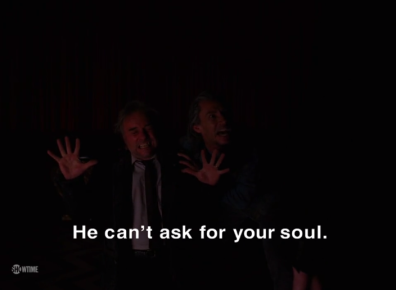 Taking a step back and looking at BOB’s origins, we see him coming out of the Experiment’s mouth in a spew of goo and eggs. Going along with the Roman god theme, this would make the Experiment Ops, who mothered Pluto, Saturn, Neptune, and Jupiter. Neptune, whose symbol we can see on the map, could possible be the fortress in the middle of an ocean where Cooper ends up in episode 3. But besides being surrounded by water, there is no info to back this up.

But, that’s about as far as I can take this parallel. Maybe someone with a bit more knowledge on the matter could leave their wisdom in the comment section.

Or maybe it is a red herring…

Got a theory that you think needs looking into? Leave a comment below. If selected, I’ll brew a pot and look into it.